A place where the light changes everything.

St. Valentine… the man behind the legend 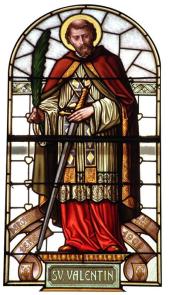 He was a Christian priest in 250 AD at a time before Christianity was fully accepted. He married people illegally so the husbands wouldn’t have to go to war. This was much to the ire of Emperor Claudius II, who sentenced him to death: beaten, stoned and beheaded. While in jail, awaiting his sentence, Valentine healed the jailer’s blind daughter, restoring her sight… and on his execution day, he left a note in his cell for her that simply said … “Your Valentine”.

Fact or fiction? Regardless, he is the reason many of us put a little more effort on this day into reaching out to someone special to show them we care.

Monica and I had a wonderful lunch date at Ta-ke Sushi on King Street. We also bought more sushi to take home for supper, after the wine of course. And the sun shone through it all. It was a great day.