Good and longtime friends of mine from St. George, Judy Barrio and Glenn Ketchum, came to me in summer 2016 with an idea for an outdoor project;

their last names incorporated into a beautiful antique window frame with one large central opening surrounded by smaller squares and rectangles. The entire grid work of the window is original wood… old and very lovely.

Glenn envisioned their names in colored glass on a clear textured background and colored blocks around the perimeter. Glenn produced the original template for the letters using Microsoft Word and sans-comic font. He sized and colored the letters (not necessarily final choice) on the computer and printed the template on white paper. Then he added white border to fit the same dimensions as the central space in the frame. 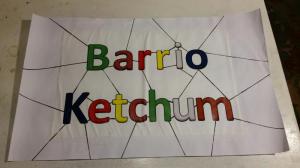 In March 2017, Glenn and Judy came to visit us in Saint John and we drew the lines for cutting and soldering the glass. Glenn liked a random look for the structure of the background clear glass. While the desired ‘random’ look is achieved, the lines were actually placed with precision and lots of careful design engineering. We had to continuously consider how the addition of a line would affect the cutting and grinding of the background glass. So, the ‘randomness’ is really quite calculated. Slight changes were even made to the photo you see here but I did not get a final pic of the pattern (close this this though).

With lines drawn, we started looking at colors of glass. There are thirteen letters between their two names and fourteen squares around the perimeter. Judy likes earthy colors (red, brown, green, gold) so we stayed away from lighter blues, purples and pinks but still decided to go for as many of the earthy color pallet as possible. With each letter a unique color and some perimeter blocks also unique, plus the randomness of the connecting lines, the style of the composition is “mosaic” (delightful).

For all this to come together, I had to involve Glenn and Judy at every step of the process. We collaborated a lot! In person, by phone, by messenger and texting. I worked through Glenn mostly and he would relay back and forth with Judy and me. He was a trooper to tolerate such daily interruption to discuss something glassy with me. But thankfully he was willing to engage in the artistic process. Our discussions led to changing a couple of letter colors and a couple of perimeter block colors and the result was transforming.

Grinding took the largest percentage of the time. Many deep curves both large and small required all my various grinder bit sizes throughout the project. I confess to ruining a few pieces through carelessness and that extended the pleasure of more grinding time.

Finally with panel completed and polished, I took it all to Glenn’s house for assembly into the frame. I helped hold the pieces in place while he stood back to examine and choose the placement of the perimeter blocks. We fixed the glass into the frame with carpentry pins. Later before it goes outside, Glenn will weather proof it all around with putty.

It was a real pleasure to make this for Glenn and Judy and to collaborate with the client throughout the process. I’ll try to update the gallery later with a summertime shot of the piece mounted outside (hopefully with them both in the shot).

Here is the photo gallery of the project phases.